When we stepped off the jetway at the Praya International Airport on the island of Lombok, the mid-September sun had already set.  It was about 8:30pm and the small domestic arrivals terminal was quiet.  There was a single snack stand which was closed, and just one of the two luggage carousels circled slowly.  A few Australians hauled surf boards toward the exit, where a small group of drivers stood waiting for their clients with names on signs.

As Luke and I grabbed our backpacks, we geared ourselves up for what would be coming over the next few days.  It was our second week in Indonesia and Lombok would be the third island of our journey.

We were going to spend our time here climbing a volcano.

The climb would take three days and required a team of local porters and a guide.

Mount Rinjani is the second highest volcano in Indonesia, looming tall at 3,700 meters (a little over 12,000 feet). At the top of Rinjani, the caldera extends several miles wide.  The rim offers breathtaking views of an expansive lake called Anak Laut or Child of the Sea. The water is deep blue and wraps around the base of the smaller, cinder cone of the volcano called Mount Barujari.  Barujari is the portion of the volcano that remains active today.  On the edges of the lake are small pools with hot thermal water and small cascading waterfalls.

That said, I didn’t really know any of this when we arrived.

I’d never seen a volcano before and wasn’t entirely sure what to expect. We hadn’t done a ton of research, just enough to arrange the necessary details and logistics.  We are pretty avid hikers, so I wasn’t too concerned about my physical ability to take on the climb.

How hard could it be?

We were greeted by a Lombok native named Ruddy, who sat cross legged on the ground with our names on a sign.  He threw a lazy wave in our direction and then hopped up to chat with us as he directed us toward a van.  I was tired from our busy morning in Yogyakarta and afternoon of travel, but a three hour drive north to trekking headquarters still stood between us and bed.

The roads were narrow and winding.  To warn oncoming traffic, Ruddy tapped the horn every few minutes.  On entering the jungle, the horn was tapped every thirty seconds or so.  The horn made it hard to sleep, and I’d soon run out of questions to ask Ruddy.  Luke slept next to me and I sat awake, wishing I could see the jungle views that flew past the dark windows.

It was well past midnight by the time we had condensed our packs at headquarters and laid our heads down to sleep.

Day One:  To the rim of the caldera.

6:00 am was bright and sunny.  I was tired, but we were  pumped to meet our fellow hikers and hit the trail.  There were five hikers in our group: a German couple named Volker and Angelica, a single hiker named Robin from Belgium and Luke and I.  We would be led by two guides, Heru and Eddie, and supported by a team of five porters.

At the National Park headquarters and official starting point of the trek, liability waivers were signed and we followed the sign to the trailhead.  I mean … how could you miss it?

As we set off, we surveyed the variety of other groups who would hike the volcano alongside us.  People from all over Europe and Australia made up the majority of the crowd. We did not meet any other American’s (from North, Central, or South America), and soon enough many of our fellow hikers began calling out “America!” when trying to get our attention.  (Trail names set!)

Our guides Eddie and Heru were pretty cool.  Eddie was in his late 20’s and fairly serious.  His hair was dark and shiny, always perfectly windswept.  He usually walked near the back of the group, ensuring everyone was doing okay and giving little bursts of encouragement when needed. Eddie was young, maybe 20 years old at the most.  He was goofy, always dancing and laughing and singing Bob Marley in a high-pitched and accented falsetto.  Luke and I liked him a lot and enjoyed falling into sync with his hiking pace, singing along with him in an unofficial karaoke session as we climbed.

The porters were all fairly small men, native to Lombok.  None of them spoke English, but we communicated through smiles and hand gestures.

The porters were incredible.

I was absolutely in awe of them.  They could not be paid enough for earning their living in such a challenging way.

They carried two large baskets laden with bottles of water, pounds of rice, noodles, fruit, eggs, tents, sleeping pads, sleeping bags, cooking equipment and more.  I asked about the weight of the baskets and learned they were upwards of 90-pounds at the start of the trek.  The baskets were fastened on either end of a long wooden pole, which they rested on their shoulder as they made their way up the volcano.  They moved quickly, arriving at base camp long before the rest of us with tents pitched and dinner started.  They did all of this in cheap, rubber flip flops – some didn’t wear shoes at all.

The first day started quite mild.  The first few miles were a gentle incline through a dry landscape of long, brown grass.  The skies were a deep blue.  We moved slowly along, getting used to the elevation and taking in our surroundings. 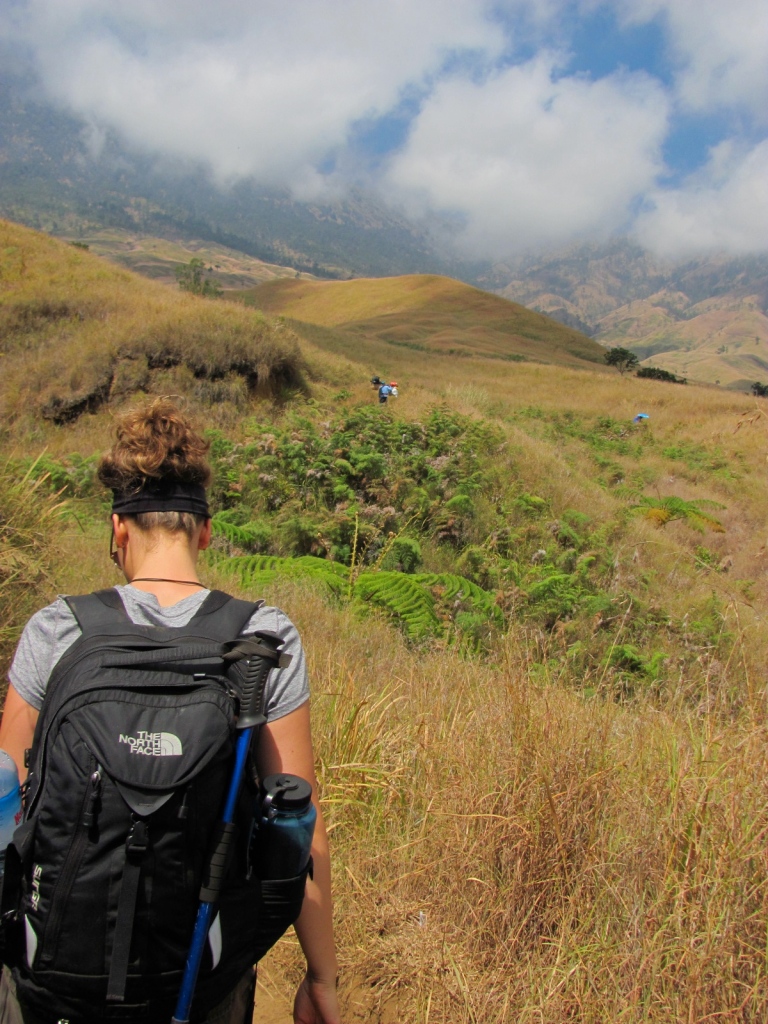 Quite abruptly, we began to climb up.

When I say we began to climb up, I’m not referring to a gentle ascent made accessible by switchbacks and intentional routing.  I mean straight up.

The first day, we climbed almost 1500 meters (about 5,000 feet) in a more or less straight line from the base of the volcano to the rim.

Daily vinyasa yoga, Pilates, squats, 5k runs once or twice a week, and week long hiking trips on the comparably gentle slopes of Appalachia did NOT prepare me for this.  The altitude shift was getting to me, and my thighs burned from the effort.

But the surroundings were beautiful.  Often, to see incredible things, you have to push yourself to new levels.

No turning back now.

A few hours in, we reached cloud level.  The landscape was misty and grey, with contrasting colors of deep green plants and shrubs. It felt prehistoric.  There were no dinosaurs, but there were a ton of monkeys. 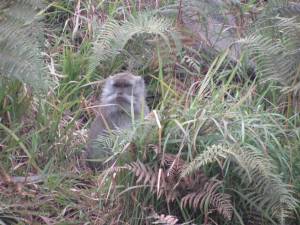 Volcano monkeys!  They lived primarily at cloud level and skittered about in the shrubs on the edges of the the trail, hoping to snag some food from snacking hikers.

Coming up over the clouds, the sun was hot and intense.  The landscape became incredibly dusty.

After one final, grueling push and we finally stepped onto the rim of the caldera.  Higher clouds had parted and we could see the summit looming tall in the distance.  It snaked up into the sky, a knife edge trail leading to the spot that marks 3,700 meters.

Frankly, I did not know if my legs would do it.

Happily, the crater rim marked our camping location for the first night, so the summit was future Katie’s problem.  I sat my butt down on a camp chair and reveled in the glory of not moving, taking in my surroundings with a giant bottle of water in one hand and some cookies (bis-quicks, as Eddie called them) in the other.

The view was stunning!

Looking down the slope we’d just climbed was a top down view of a soft blanket of clouds.  Looking into the core of Rinjani, the great crater lake Anak Laut glistened blue, a little over 600 meters below (about 1900 feet).

By this time we had become pretty good buddies with the other trekkers in our group.  Hard physical feats bond you with other humans at a pretty accelerated rate.  Robin and Volker spoke English, so our conversations were easy and made up of sharing stories of our adventures.  Angelica spoke only German.  It didn’t matter that we couldn’t talk to her; we had a great time communicating through exaggerated facial expressions and hand gestures.  She is probably the person we laughed with the most over the course of our trip!

I watched the sun dip behind the rim of the volcano and felt the temperature fall below freezing. Layered in every piece of clothing I’d brought with me, I was in my sleeping bag by 7:00 pm, watching the canvas tent billow in the wind.

After darkness truly set in, Luke slowly coaxed me out of the tent. He guided me over to a small spot on the side slope of the rim and we laid down to gaze at an absolutely magnificent and clear sky.  No clouds, no light pollution.  The Milky Way was a thick band of stars. Millions of tiny lights twinkled above us against the deep blue night.  I took a moment to acknowledge how very small and insignificant we are in the vastness of the universe. Lying on the side of an Indonesian volcano, we counted falling stars until we couldn’t stand the cold any longer.

Day Two:  To the Summit and back, into the caldera and back the up the other side.

In other words, day two is the day crap got real.

To climb to the summit of Rinjani for the 7:30am sunrise, you must leave camp by 4:30am.

We woke up in the darkness of early morning to the sound of Heru’s voice just outside our tent door.  It was still very cold and the wind had gained some momentum over the night.  The canvas walls of the tent made snapping sounds as they whipped back and forth.

I surveyed my sore muscles.

For a moment, I seriously considered skipping the summit climb and watching sunrise from the caldera rim.  The day was going to be long enough without it, and the view was already magnificent.

But the moment passed.

In a swift, affirming movement, I broke out of my cocoon of warmth.

I put on my boots, shivered my (very sore) butt off, and climbed out of the tent with Luke.

Gazing toward the black silhouette of the summit, we could see that other groups had started even earlier than us.  Along the trail leading up, a string of tiny, distant lights illuminated like a glimmering line into the starry sky.  Headlamps of hikers moving towards the summit.

It is a scene that could not be captured by my subpar camera, but it was weirdly beautiful.

It made one thing clear.  Sore legs wouldn’t be the reason I didn’t summit. By hell – I was going to at least TRY!

And with that, our group set off into the darkness.

For the rest of the story, stay tuned for A Walk Above the Clouds, Part Two, which will be posted next week.

Hi, I'm Katie! I'm a travel lover, yoga student, yoga teacher, outdoors enthusiast, hiker ... a list that's growing every day (for all of us, right?). Drop by my page to read world travel stories, snag some travel tips, and learn about yoga practice both on and off the mat.

2 replies to A Walk Above the Clouds: Part One